Despite myths of ferocity and aggression, a well-trained, properly socialized American Pit Bull Terrier is indeed man's best friend. Also known as 'Pitbulls', 'Pits', 'APBTs', 'Pitties' and 'Pibbles', Pitbulls are well-known for their fabulous breed personalities, noted as friendly, loving, loyal and gentle dogs. In times past, the Pitbull was the symbol of the typical family dog (such as Pete the Pup from The Little Rascals series) and held the place in culture as the All-American Dog, a position now more commonly held by Golden Retrievers. However, the Pitbull is still extremely popular, regardless of breed bans in some places, and famously embodied in current culture as patient, well-trained animals, such asCesar Millan the Dog Whisperer 's Junior and Daddy. Pitbulls are smart, tenacious, fast and strong, which makes them great dogs for agility trials.

Ear Cropping can be performed on Pit Bulls of any age during the game. It costs $250 and is irreversible.

The artwork for American Pit Bull Terriers was drawn by Carnivale and puppy art was done by Xylax. 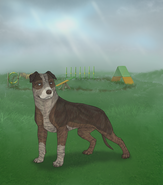